Stand Up About Life 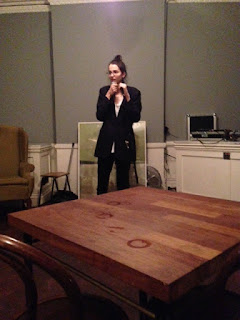 Having been out every night this week thanks to a mixture of comedy gigs, dinners and trips awayI had expected to spend this evening with the cat mixing my forthcoming album (yes, really) and watching bad television.

This failed to materialise though as Rosana Bosanac texted me to ask if I fancied ten minutes at her night hosted at The Haggerston in Dalston tonight. With the demise of The Comedian's Club in Leytonstone, Sunday nights are pretty thinly accommodated by new act shows so I was more than happy to accept.

The Haggerston is a cool pub. I've had more than a few drinks here before as it's little more than a stone's throw from where I work. What I didn't know was that is had a kooky little room upstairs where everything from comedy to film nights happen.

Things started unusually when it turned out that there could be no lead found for the microphone and there were just four acts on the bill - including Rosana on MC duties. Still, there were a number of people who'd be persuaded to come upstairs for the show (the photos isn't an accurate representation - there were about ten people in the room) so we made the night happen in the face of minor adversity.

I've never performed without a mic before but it was pretty liberating to be able to run all over the room waving both my hands about. I kept the backing track to a very moderate volume given I was projecting teacher-voice style and got a pretty good reaction for my troubles.

As gigs go it was a pretty odd one but strangely good fun.

And technically I headlined, rock n' roll!
Posted by Andyquirk at 15:52 No comments: 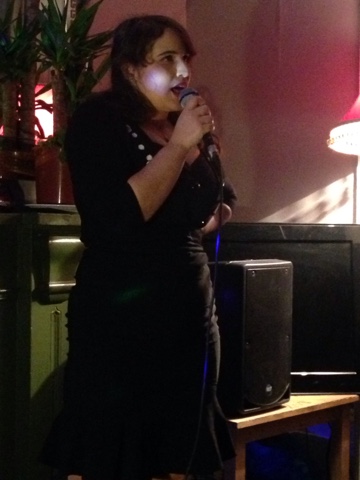 Tonight's Bear Jokes restored my faith humanity on various levels. Ten quality performers, an attentive and happy real audience and a set for me where I felt energised enough to leap on a sofa at one point to illustrate the intricacies of selfie stick obsession. Two people even came after reading the recommendation in The Dalstonist. Proof positive listings do sometimes work!
(Roxy Bourdillon pictured)
Posted by Andyquirk at 16:23 No comments: 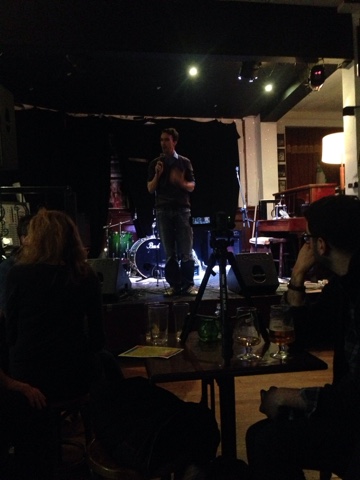 My first show in ages really couldn't have been stranger. After nearly an hour's delay due to technical issues the Gunners launched with a musical duo who played for too long and talked all over the other acts with their friends.
As the night progressed we were presented with both the wonderful and the truly weird. A token drunk woman took it upon herself to heckle constantly - though even she was drowned out by the bedroom DJ who did 15 minutes of Firestarter-era Prodigy.
By the time my much delayed set rolled round it was nearly eleven and the crowd was down to single figures. Phones went down quite well but the second track  went down more like a shit in a lift. Zara Brown picked things up after some Christian hip hop but it truly was all over by that point.
Great to see this night finally picking up, at least in the early stages. Now let's just get some equipment that works. I could do without the bangs and pops during my set!
Posted by Andyquirk at 16:39 No comments:

Clash of the Tight Tens 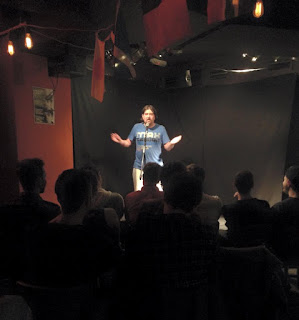 After a slightly quieter Clash of the Tight Tens last month I was justifiably nervous about this night and looking for a convincing bounce-back. Thankfully, due to a deft combination of MeetUp socialites, Time Out readers and fans of the acts the room was pretty much full as the room lights went down and the stage lights came up.

Andy Onions was on top form as MC once again and pulled back from the shouting long enough to chat to the audience and get a convivial atmosphere in place before the acts came on.

Every act did well and it would be impossible to highlight some acts in contrast to others so it's a standing ovation for Sophie Henderson, Cassandra Mary Canary, Matt Duwell, Roxy Bourdillon, Sam Mitchell, JB Carter, Lucas Jolson, William Lee, Chris Adams and - erm - myself!

It was also the little things that made the night work so well. Gone was the manky mic stand of the previous shows and in its place one that didn't wobble. The stage backdrop was complete for the first time ever. Switching the venue's mic for my own also worked wonders for cutting down on breathing noises getting picked up and amplified. I have no idea how or why but I'm just glad it did.

Work's been busy so I'm doing less gigs at the moment but there a few towards the end of the month and in November so I'm taking the time to finish writing some new ones and will then strike out when they're ready.

Posted by Andyquirk at 12:06 No comments: 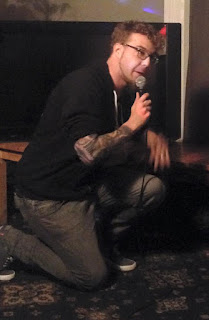 After a busy day at work Bear Jokes was just the thing to kick back and relax to - and being MC and promoter this may sound particularly unusual. The fact is that I'm very happy with my little night. Despite the ups and downs of turnout (it started quiet but grew throughout) everyone always seems to have a really good time and there's some genuinely funny stuff going on at the microphone.

As is my responsibility, I opened to the night to a room of acts and few others but the response was good and it was nice to get back into performing after well over a week off cause by the dreaded but predictable first term cold. I'm not going to critique the acts one by one as that would be, quite frankly, dull and who am I to throw my opinion around the net anyway. Still, special mention to the man pictured - Jay Cowle - who topped the night with a strong off the cuff opening part and then delved into the big dark box marked "new material". Some of it didn't work, most of it did. Well worth watching!

Clash of the Tight Tens on Saturday.
Posted by Andyquirk at 15:25 No comments:

This week I have a cold

It's amazing what a simple cold can do to you. No time taken off work but performing is all but impossible thanks to a combination of feeling knackered by 8pm and a throat that gives out if the volume raises above conversational. Sad times, I'd been looking forward to the Freedom Fridge tonight. Next stop, my own Bear Jokes next Tuesday.
Posted by Andyquirk at 13:49 No comments: