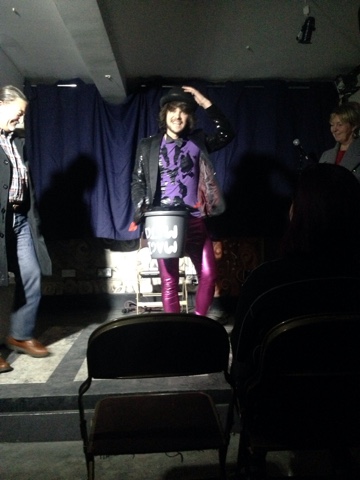 Hilarity in Shoes excels at packing in acts like no-one else can. Tonight I was part of a 17 act bill where I knew just 5 of the performers. Nathan Cassidy, LJ D'Funk, host Michael Hill and Declan Kennedy were just some of the highlights. Outside of them there were bizarre magic acts (above), women with flashing rave hair and a few 5 minute bombers who took it on the chin and enjoyed themselves regardless.
5th on in the first half was a pretty good spot and after initially announcing the wrong song to kick off with I launched into Phones and found myself bullying the audience into joining in by the end. The insistence seemingly pulled off though as people were much more vocal in Crisis of Conscience, admittedly laughing at punchlines about 3 seconds too late. The fast rapping clearly too fast to process and laugh at on time it seems,
That or they found the whole concept ridiculous and were generally just laughing in bewilderment.
Either way, a victory.
Posted by Andyquirk at 16:01 No comments: 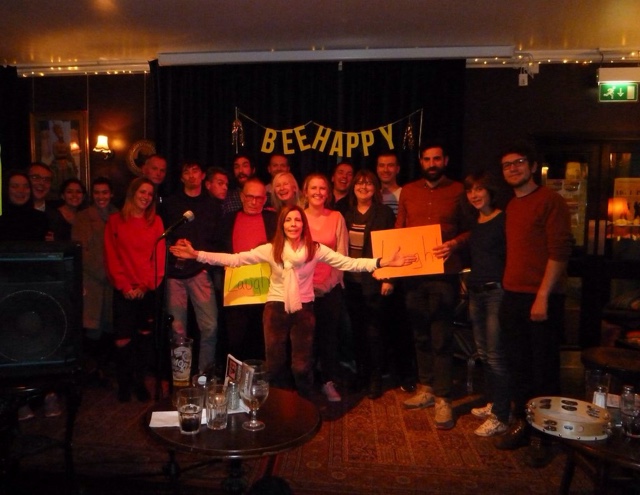 Tonight I travelled across the river to Deptford and Sonia Aste's Bee Happy comedy night at The Duke. As a pub it was a lovely venue, admittedly sitting seemingly in the middle of no-where, with a charming back area for the show.
Sonia is an enthusiastic host armed with musical instruments and very prone to shouting "yayyyy" on a regular basis. She is what a night like this needs and a world away from the cynical deadpanners who often host comedy nights. Not that that's a bad thing. Just a refreshing change.
So I opened the night and One Shot got people joining in as its role intended. Selfie stick was somewhat crippled by a dodgy mic cable but I pushed on through and most of the punchlines hit.
Opening may lack the kudos of a later spot but it does mean you can relax with a beer for the next couple of hours rather than repeatedly rehearse lines in your head. Some strong sets and good conversations later I was back on the DLR with an open invite to return.
Posted by Andyquirk at 14:49 No comments:

It's been a couple of months in the making but yesterday it was agreed with Viz "The Spoon", open mic promotions legend and now overseer of various London venues, that Famous First Words will be re-launching in January 2016 at The Gunners in Finsbury Park every Monday night.

The name change from the current night running there (the less than original "Gunners Open Mic") reflects the change in personnel with both James Harris and myself joining current head honcho Nick Purves to take on individual nights throughout the month. Nick will continue to host and book for the first and third Mondays whilst James takes the fourth and I settle into the second.

To make this a truly open mic affair (unlike Bear Jokes and Tight-Tens which are very much curated by myself) people will be able to sign up for their 5 minutes / 2 songs on the wall for each individual event - with the first 15 guaranteed a spot. To keep the respectful community spirit of open mic alive all acts are required to arrive by 8 and stay 'til 10 and also buy at least one drink so this very nice venue can remain in business. Walk-up spots will also be available.

If you want to get the full picture join the Facebook page here.

Tomorrow I'm off to The Duke in Deptford for Bee Happy Comedy. Should be a nice change of scene.

Posted by Andyquirk at 12:46 No comments: 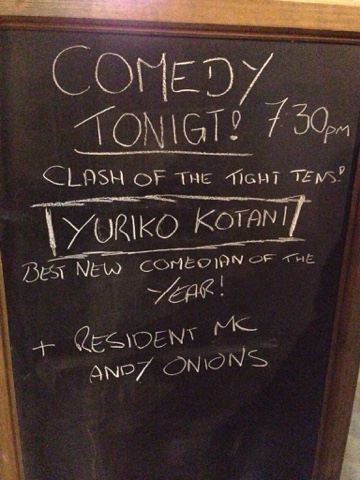 After a very slow build online I had been worried about turnout for my Saturday night flagship but thanks to a massive online push and the not inconvenient timing of Yuriko Kotani winning BBC New Comedian of the Year the day before the venue was pleasantly busy as the lights dimmed.
The first half saw in some slick performances but the energy in the room was on economy mode throughout so as I took the stage for the final spot of the half I knew I needed to pull out all the stops. One Shot got the crowd onside with plenty of shouting along as I jumped about and generally acted half my age on jelly beans. Crisis of Conscience mercifully worked and I finally remembered all the words. For a muted crowd they actually made a huge amount of noise with the right encouragement.
After the break Yuriko put in her award winning set and from there on in we got surrealism, line graphs for paedophile identification and high camp at its finest. Some drunk men wandered in, looked confused and left even more so. A great accolade if ever there was one.
Drinks followed and it was all good. Dimitri Bakanov even got a date out of it from an admiring audience member!
Posted by Andyquirk at 10:28 No comments: 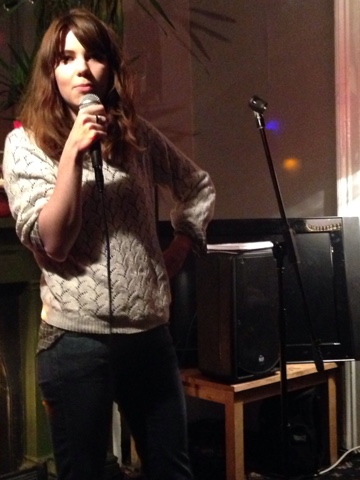 It really wasn't looking too promising with the extreme weather warnings in place but Bear Jokes returned to fine form last night with a completely filled room and some excellent sets. I opened proceedings with "crisis of conscience" and ended up interspersing the track with encouragement to people poking their heads through the door to take a seat. The track went down well regardless and I was asked if I had a Facebook fan page so they could 'like' it.
Roxy Bourdillon and Sophie Henderson go from strength to strength - with a 50/50 split of male and female acts it was a victory for the girls for the most part.
(Pictured: Sophie Henderson)
Posted by Andyquirk at 02:54 No comments: 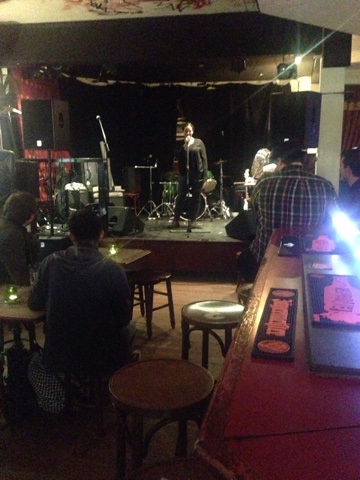 It's been a few weeks since I was last at The Gunners and in that short space of time it's shifted from 99% comedy with the occasional music act to majority music. Nothing wrong with that in itself but guitarists tend to plump for 3 songs, which when multiplied by string pluckers leads to very long nights. Tonight I followed a band and a poet at 10.50 when many of the acts had slunk off home. Still, those that remained joined in enthusiastically with Crisis of Conscience and once I'd seen Gatis Kandis do his thing to even fewer, but no less enthusiastic, people at 11.10 it was on the bike for the 30 minute cycle home.
Think I'll take the week off.
Posted by Andyquirk at 16:09 No comments: 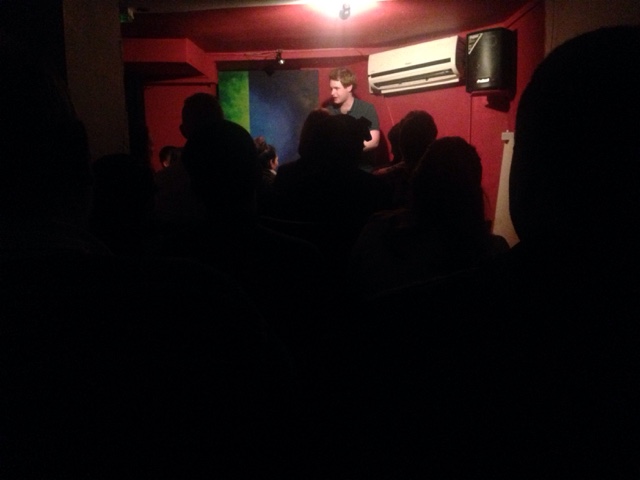 Saturday night in Covent Garden is a big deal in comedy. Cafe Mode may well be the new act minnow of the west end scene but its capacity 30 were pretty typical of what to expect. Tourists, couples and a large contingent of early twenties taking in something before clubbing was what awaited me and my Bluetooth speaker (the impressive PA had been crippled by a broken amp. Without my speaker I would have had to pull out - £20 well spent!)
Chris Coltrane opened and was far too good. It settled after that though and I came on to a crowd slightly less excited than I'd have liked.
Two Shots started quietly but by the end the crowd were joining in. During Selfie Stick the demographic differences became pretty pronounced though with the under forties largely clapping along in the right places and, in the case of the under twenty fives, audience members were actually doubled up laughing.
The three women in their forties/fifties however simply looked bewildered. It's not for everyone.
Great gig though - and I'm not not just saying that because I got a free pizza afterwards...
Posted by Andyquirk at 01:41 No comments: 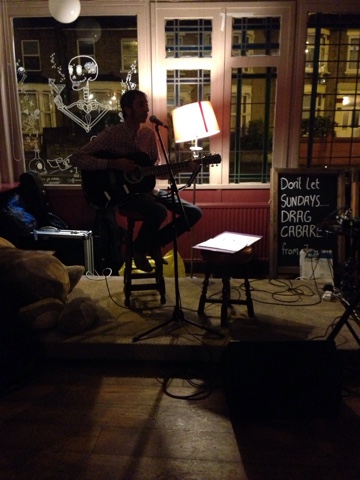 Tonight's show was a step into the unknown. The Northcote is less than 10 minutes from me and promised 4 songs. Being a music night I wasn't sure if I'd be crucified for not playing an actual instrument but as it turned out this wasn't an issue. The crowd was small (15) but enthusiastic. Participation was reassuringly active and One Shot, Chilling and Selfie Stick all got the interactivity necessary to make them more than a 36 year old shouting into a mic. Many pats on the back followed which suggests music open mics may generally be short on laughs. I'll be back...
Posted by Andyquirk at 15:47 No comments: 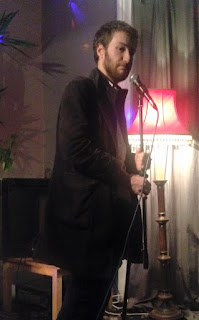 With two last minute cancellations, a no-show and several acts arriving late the start of Bear Jokes tonight looked more than a little disasterous. The comedians were the only bodies in the room after three people had arrived five minutes before show time then legged it within two - presumably scared at being the only "real" people.

Despite my best attempt at charm down in the pub they didn't return and I kicked off things with new track, "Crisis of Conscience", a song about worrying if giving up your tube seat for pregnant or old people may actually insult them if they are in fact just fat or old looking. This worked. The follow-up, newish song "Too Loud", didn't. This one needs work, binning or banishing to a b-side should such things exist.

Despite no audience at all for two acts the later performers faired better when real audience peaked at four and those in attendance swore blind they'd return in two weeks time. Here's hoping, the Hackney new act comedy scene is getting really cramped and competitive.

Posted by Andyquirk at 15:21 No comments: