Nice N Spikey at The Regent 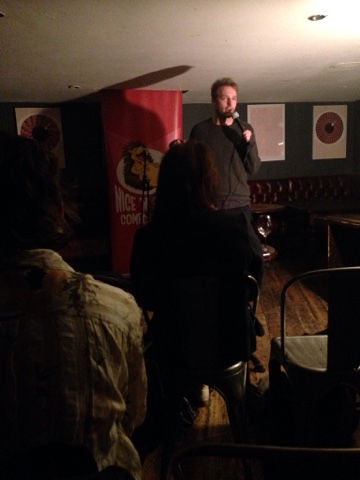 Tonight I pedalled over to Angel for Nice N Spikey at The Regent. A nice little basement room, the numbers were low and went into stark retreat in the second half despite some great acts - including MC Nathan Cassidy. My set struggled in front of six people but lesson learned on starting with an old one when it turns out you've spent too long with the introduction to do the new one afterwards.
Posted by Andyquirk at 15:42 No comments: The final Tuesday night incarnation of Bear Jokes brought out a few hardly souls to enjoy some fantastically off the wall sets. Haran X (pictured) decided what his set needed was performance in a horse head, which pretty much summed it up.
I kicked off the night with West End to a decent response but then made way for the main show. A special mention goes to Spanish singer/songwriter Jesus Corredeas, who did a brilliant mid-show music spot with originals and a Bowie cover.
Thursday Feb 4th is the next one. Should be great!
Posted by Andyquirk at 10:27 No comments: 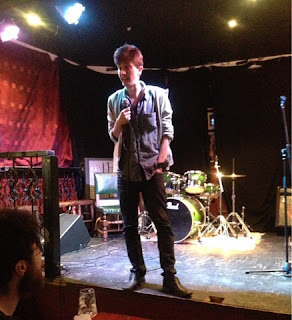 The week started nicely with a busy Famous First Words on Monday. As MC and overseer of the running order it was great to see a number of familiar names sign up alongside many total newbies with gigs barely in double figures. The quality was staggeringly good for a thoroughly non-curated event and using my stopwatch as much for theatre as for timekeeping I kept things tight and ploughed through 17 acts between 7.45 and 10.05 with a ten minute break in the middle - so there was plenty of time for a post-show social. The social is something I really want to promote. It's lovely seeing performers all over London at different shows but there's rarely time to actually chat. Keeping it tight also means no-one is stuck hanging on 'til gone 11 for their five minutes of fame to then perform to the barmaid and the promoter. 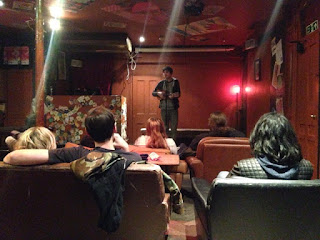 This evening I had the pleasure of performing at Matt Duwell and Jack Brook's new night, Thinky Big Words, in Stoke Newington. The room is decent, the PA can handle my backing track and there was an actual audience. There were some excellent other acts on the bill including Michael Hill, Jon Long and Yuriko Kotani - who topped the night with me the penultimate act. West End finally got a public airing after much rehearsing in my head all week and went pretty well. The eighties style synths and drums supported my Gary Numanesque chorus line and the crowd were quick to join in with the backing vocals. It's a really different vibe to much of my other stuff too which is good in terms of variety. Certainly a stayer.

To top it off Jack invited me to do some guest spots at his Edinburgh show should the one I'm involved with get booked in. Bonus!

Posted by Andyquirk at 15:42 No comments: 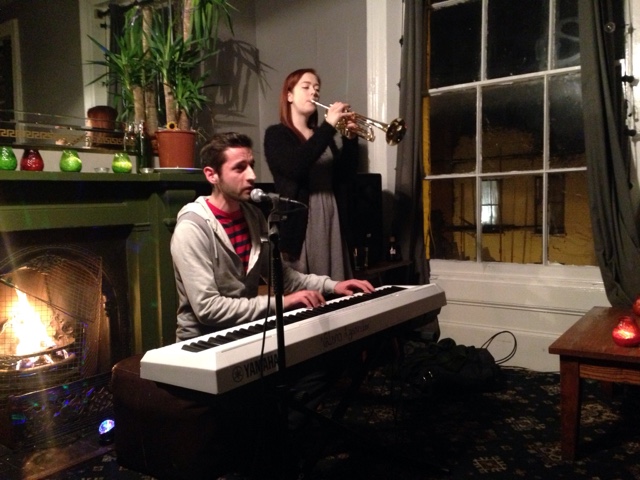 A busy start to the week with the launch of Famous First Words at The Gunners and the first Bear Jokes of the year the following day.
FFW had its full 15 prebooks filled and a few walk ups making it a very successful launch given the time of year. I did a track but as part of the promotional team my head was more in that sphere. Some acts were great, others showed promise even if the full package wasn't there. However, that's the whole point of open mic and it would be all the poorer without eccentrics and oddities.
After the show it was time for a group chat on Edinburgh with Andy Onions, Nick Purves and James Harris. We have a show, we have an application. Now we wait.
Tuesday night's Bear Jokes had some great sets and a willing audience. Chilling and Phones got an airing and the music act, Valerio Lysander (pictured), was astounding. Go find his tracks.
The confused looking older men left after a storming set about transsexual porn by Jake Pickford but you can't please everyone!
Posted by Andyquirk at 10:45 No comments: