With a new job starting and plenty of life admin to get on with September was a quiet month on the comedy front. My own shows aside, I didn't do much else and instead focussed on writing, compiling a promo video with Edinburgh footage, setting up my new night in Leyton and booking what amounts to a small but perfectly formed UK tour over the October half term. The "tour" as it stands is currently four dates long but could go one better with a London show thrown into the mix. Something I'm waiting on but will hopefully come through.

Post-festival I've decided less is more and rather than trapse the open mics three times a week I'm focussing on fewer, but bigger, shows. With new songs in the offing I will need to road test them somewhere but that's probably taken care of with Famous First Words (who I remain a firm supporter of, though no longer a booker) and a couple of my preferred new act nights around Hackney. Yesterday I celebrated another booking that's actually paid and though I don't really need the money I appreciate the investment.

I've also hacked out what I think will approximate to a full Edinburgh show for 2017 but need to get that worked out to a greater degree in the next few months as I'm looking to do a few of the other festivals in the run-up. I hear good things about Hastings and will probably also look to Brighton given how close it is. Any other recommendations are very much welcomed. I've also set my sights on the Musical Comedian of the Year awards who open applications in just over a week.

Tight-Tens will also hopefully be heading across the border next summer too. Currently I'm considering MCing in a toga.

I feel some sub-headed sections coming on...

Stand Up at the Leyton Star
A full length show in the second half preceded by a first half of 8 minute support sets. First one on October 20th.

Posted by Andyquirk at 11:17 No comments:

Bear Jokes at Pub on the Park 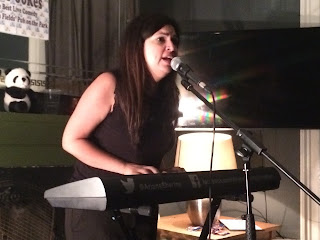 September can go one of two ways. As Tight-Tens proved, too early and you’ve got people reeling from the bank holiday and no students in town. Get it right though and everyone’s recovered and people are looking for something to do.

Bear Jokes headed towards the latter with a busy little room made up of medical students and a handful of actual fans of the acts. Opening with, ‘Selfie Stick’, the room was suitably warmed for the first half – a half featuring strong sets from many. This included a set of largely new material from Ben Pope, who hit many more times than he missed, and a darkly uplifting ten from Katherine Ferns.

The half closed with Ariane Sherine and I performing, “I’m Not Putting That In My Mouth”, for the first time. It’s quite a song and one where we might need to work on our on stage interplay to get the most out of it. I’m considering bringing an actual ladle the next time.

The second half was busy again with great reactions to a really strong string of performances from James Harris, Adam Jamal and Matt Smith. It was left to Ariane to close the show with a trio of naughty songs that kept the sofa spectators amused to the end.

After an erratic start to 2017 with low audience figures in danger of becoming the norm my flagship night appears to now be in rude health. Plenty of people signed up to the mailing list at the end and I’ve got a few ideas to fully utilise the newly introduced mascot (acquired in Edinburgh – see previous blogs) and give the night a few more quirks.

Tomorrow I’m meeting the bar manager of a pub closer to home to set up a monthly mid-week night featuring a full 45m show from an experienced act with 10m supports. The kitchen table empire continues to grow...
Posted by Andyquirk at 04:15 No comments:

Since my blog on the costs of Edinburgh Festival went semi-viral (usual readers of this blog: 80 / Current hits on that entry: 3,523) I've spoken to a lot of people about my time up there. It's also been a talking point at family gatherings. Even a taxi driver in Weymouth who I went to school with was talking to my mum about it last weekend when she recognised her in her cab. So what now?

There is a new song in production but it'll be a while before it's finished so for the while I'm cutting back the gigs to those I run, paid shows and opportunities outside of London. With a big South London cabaret and gigs in Cambridge and Liverpool booked in so far it seems like the right way to go. And I still have Bear Jokes and Tight-Tens, the latter of which I was running last Friday.

It was always going to be a tricky one as I hadn't been in London to do the usual level of promotion, many comedy fans had been to Edinburgh and had their fill for the while and students weren't yet back looking for a cheap night out.

Still, there was an audience - including several MeetUp regulars and the acts were as great as ever. With smaller than usual numbers the energy in the room wasn't what it could have been but Sonia Aste and David McIver put in particularly upbeat performances to get the nervous smiles converting to laughs. My own set went down well too - with Andy Onions and Sonia actually dancing to both tracks. Afterwards I stayed on until the small hours with the MeetUp group, a move that made me almost miss my train to my brother's house warming the next day!

Alongside writing a new song I'm also writing music for an intro rap to both my nights when I MC and the embryonic stage of my full show for next year. The rule really is go big to get big laughs so the more full-on the better.

This Thursday Bear Jokes returns to Pub on the Park with Ariane Sherine closing the night. Should you come you'll be party to the debut live performance of our duet, "I'm Not Putting That In My Mouth" - sadly delayed from an Edinburgh debut due to Ariane's ill health at the time. The full event details can be see here.
Posted by Andyquirk at 13:19 No comments: