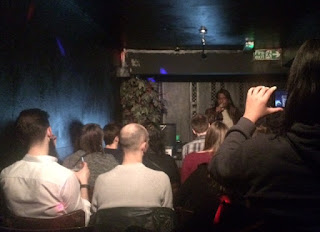 It's been a considerable time since I've performed at Cafe Mode. Between then and now the restaurant basement of dreams has painted its walls black, installed a killer disco light and moved the stage from one end of the room to the other.

Tonight's crowd of diners were clearly enjoying the food as they arrived downstairs after 9pm when the show was scheduled to start a half eight. With one eye on the clock we, the assembled performers, huddled on the back rows of chairs whilst MC and promoter Peter Merrett talked to the front row for a while before bringing on the first act.

With twelve acts to navigate in less than two hours most performers whittled their sets down to five or so minutes and provided the crowd with consistent chuckles. However, come the half-time break about half of them declared it an early night and headed off before I opened the second half. In the spirit of efficiency I performed just West End, but fronted it with my new intro rap - which will replace my usual opening chat in my Edinburgh show.

There's something strangely liberating about coming on to an introduction voiced by a computer synthesised text to speech program sounding like Joanna Lumley - followed by heavy drums that may or may not have been in part inspired by Dizzee Rascal's "Fix Up Look Sharp" (which I suspect were sampled from something else anyway). Anyway, it got the eight or so real audience waving their hands in the air as I individually high fived all of them in turn whilst shouting out like Jay Z at Wembley.

West End went down well, with plenty of kind words from both performers and audience. There wasn't time to give Sound of the Tinny Drums is first non-workshop airing but it's definitely on the list for the next show.

Dropping back into my chair at the back I then relaxed and enjoyed the acts that followed - the headliner being particularly sharp and getting one last burst of energy out of the crowd before they meandered home.
Posted by Andyquirk at 15:27 No comments:

Stand Up at the Leyton Star

Back in the small room at The Leyton Star tonight and every seat was taken when comedy commenced at 8pm. After several nights of high quality comedy here extracting little more than small change from the audience at the end of the show it was especially encouraging to see that my experiment with “reserve a seat for £5” ticketing had paid off with several ticket holders in the middle row. The question was, would they think it was worth it?

Within minutes it was clear they had as the room warmed quickly to my opening rap and Peter Merrett kicked off the main show to plenty of laughter and applause. All the acts that followed went down just as well if not better and Nigel Lovell rounded off the first half nicely with a few nods to his local area alongside his some of his best tried and tested material.

Jacob Hawley previewed in the second half, firmly gripping a set of notes he referred to and scribbled on throughout. Having primed friends of his to shout out, “It’s only February, you’ve got plenty of time”, when his punch lines didn’t hit the mark it was a relaxed and a very much interactive affair. With previews you never know at what stage you’re going to see a show but even in it’s embryonic form the forty minutes had plenty to celebrate and the crowd left happy.

All that was left for me to do was to pack away my lighthouse-intense angle-poise lamp and have a beer with a friend of mine up from Wales for the day. Another great show at The Leyton Star!
Posted by Andyquirk at 06:08 No comments:

Clash of the Tight Tens at The Castle

Friday night at The Castle is always special, but this evening had the novelty of also being my birthday and so the usual crowd of pub goers and MeetUp subscribers were joined by friends, family and my partner for two hours of ten minute sets from a mixture of new and established comedians.

After a battle with the mixing desk that ended with us plugging the speakers into the headphone socket, we were ready to begin and Andy Onions did a shouty upbeat start-up in his own classic style. The first half was good with a Tight Tens newcomer, Olga Koch, dealing well both with her material and constant distraction of her boyfriend laughing loudly in the front row. I rounded off the four set starter with Tales of the Unexpected and West End. The latter giving me the best Gary Numan-esque backing vocals from the crowd yet.

Rick Kiesewetter was first on in the second and was mining gold from the outset. With his personal tales and cultural commentary hitting home at every twist and turn he had everyone – younger, older, male, female – in stitches. It was then left to the final three acts to maintain the momentum; headliner Sasha Ellen riffing between story-telling and chatting with the growing audience. If there’s one thing you can guarantee at The Castle on a Friday night it’s that a few drinkers will pick up the flyers or see the posters towards the end of the evening and wander in for a surreal giggle or two – which is always more than welcome.

Show concluded; all that remained was to thank all involved and head down for a few birthday pints.
Posted by Andyquirk at 04:53 No comments: