The Not So Secret Society @ Artworks Elephant 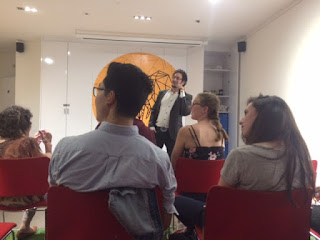 Artworks Elephant is a hipster paradise that bears more than a slight resemblance to Box Park in Shoreditch. For those of you who don't know what this is, imagine a retail and bar "space" made up of temporary units - many of which were once shipping containers. The Shoreditch version is packed and a little hideous on the weekend. The Elephant and Castle version is actually nicer, mainly because it's less busy and the drunk banker quotient is lower.

So what had I come this evening? My mum was up to visit so I had to explain to her. Not a standard comedy show that's for sure. TNSSS are up in Edinburgh this summer and are very much a cabaret event with everything from high energy burlesque to magic on the line-up alongside musical and traditional stand-up.

MC and promoter Ben got things underway in our little box to a decently full room made up of an unlikely mix of students and tipsy retirees. Candy Gigi set the standard early on with a typically outlandish ten minutes of absurd physical comedy which I'll refrain from describing further as you should go and see her in Edinburgh. From there on in there were card tricks, mind reading, a burlesque act based on Margaret Thatcher at an acid house party, Sam Rhodes looping his voice into harmonies about dog jokes, an 83 year old stand-up who'd been on Britain's Got Talent and a character act singer deftly blending Adolf Hitler and Frank Sinatra.

As for me, I opened the second half and whipped through my intro track, Tales of the Unexpected and West End to a decent response. As one cog in an unstoppable cabaret machine I felt I'd done my bit but tonight was very much about the whole show rather than one act. Another one to see should you be in Scotland this August.

Further credit to Ben also for extracting money from all who attended and then redistributing it to the acts. I covered expenses and who can complain about that with ten on the bill?
Posted by Andyquirk at 07:32 No comments: 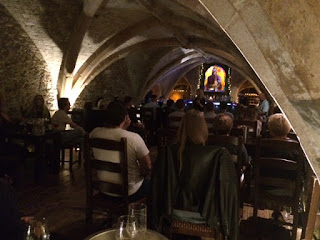 Rochester is a sedate Kent commuter town dominated by its castle and a wealth of antique shops. It also hosts two comedy nights, one of which I was at this evening. Bumping into Maggie Kowalski on the high street and then chatting with the promoters beforehand outside, we saw the great and the good of the town all seemingly coming in for a night of laughs. For a free entry comedy show on a Thursday it was a world away from what you often see in London. No "bring a friend" rule needed tonight.

And so down to the wine cellar basement styled out like a church with a many full rows of people and a stained glass backdrop. A spotlight would have lifted the gloom for the back of the room but otherwise it was pretty much perfect.

Alongside Maggie there were a host of other familiar names on the bill: Ben-Lund Conlon, Kieran Poole and Fiona Ridgewell all put in decent sets to a crowd that largely seemed happy to watch, though with plenty of to-ing and fro-ing at the back where it was standing room only and people were constantly getting drinks and playing musical chairs when one became available.

I was on second, a challenge when doing a twenty minute set, but I took it on with as much energy as I could bring to the warm-ish crowd. Sound problems hobbled the start but it was quickly resolved and people seemed to be happy with the intro track and then Tales of the Unexpected that followed it. Craft Fair got a similarly warm response but Modern Man divided the room as I thought it might - the under 25s enjoying the dubstep vibe, the under 40s looking slightly confused and the over 40s wondering why the music kept slowing down and speeding up. Still, as ever, West End pulled them all back together and I left on a high.

With trains out of Stratford less than 30 minutes from this curious comedy oasis travel time was less than to many places in London from my east end retreat. I look forward to a return trip in the Autumn.

Posted by Andyquirk at 15:11 No comments:

Edinburgh Previews at The Leyton Star 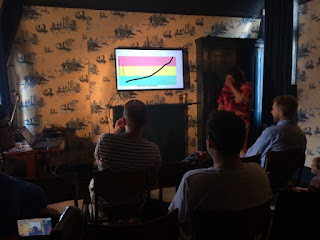 With just over a week to go before the start of Ed it seemed like a good idea to get one last preview in the bag so Andy Onions and I put together a little Sunday afternoon entertainment to see what would happen. We switched the room around to face the TV to ensure Andy's "Powerpointless" could be fully realised and set out a generous twelve seats and a tempting box of Malteasers to encourage people up from the pub.

Given the availability of a television I prepared a full visual chart rundown to display during my set. Created less than two hours before the show started, to say I may have rushed it a little would be an understatement but it did the job and will probably be with me up in Scotland now. The assembled audience (two friends, Onions' friend and his eight year old daughter plus one brave man from the bar) were obviously set to rock as I set off the intro music.

And as shows to five people go it wasn't actually as terrible as I feared. True enough, almost everyone got two goes on the Box of Frustration but with each member representing 20% of the audience no-one opted out. It was good to see that you could be sober and enjoy it too, which is a bonus. At 8 years old, the friend's daughter was the youngest attendee to my show yet and seemed to enjoy it immensely - though her dad and Andy were possibly more amused with the way I kept changing words in the songs to keep them U rated. My 45 minutes up, I tagged over to Onions for his show.

After a flooding disaster involving a pint of water and the sound desk the second show was up and running. Andy mixed in a lot of new sections I hadn't seen before - all of which worked as well as might be hoped with a single figure audience (bolstered to 7 with a further two people up from the bar). The shouty man is on his game - well worth seeing him at The Banshee Labyrinth come August.
Posted by Andyquirk at 09:06 No comments:

Stand Up at The Leyton Star featuring Abandoman 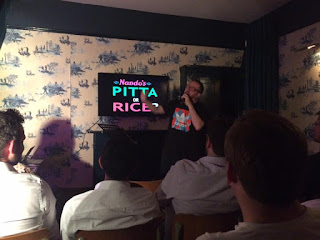 As promoting goes this was an easy night. I put tickets online for this months ago and when preparing to send out the usual listings I thought I better check if any had been sold.

They had sold out.

So for the first time ever I had to play down this show for fear of having a queue of disappointed people. Though probably a smart move this did lead to the curious situation where 5 seats remained unfilled all night even though they'd been paid for. Money in the bank....but what a waste!

The show itself was magnificent by any standard. I flipped the room so the seats faced the TV screen at the back to enable Rob Broderick (of Abandoman fame) to use it for his backing videos and squeezed just enough chairs in. This did mean some chairs ended up of the stage so in the second half my girlfriend and I were elevated like some kind of emperor and his queen watching from the royal box. It also made a good platform to film from - if I'd remembered to turn my camera on. Doh.

The first half was more than solid - I opened with Selfie Stick then passed the baton on to Maddie Campion. Following her, Lucas Jolson managed to use unknown powers to make the microphone descend into white noise and distortion and performed without to a strong reception. Working once again, I passed the mic over to Sonia Aste who injected a seismic dose of energy to the proceedings - only topped by Lenny Sherman completely smashing the show with the crowd in constant stitches. I rounded things off with a well received rendition of West End and we broke for the interval.

The second half was a master class in musical comedy. Testing out new song after new song: Rob's set was tight, interactive, playful and delivered with razor sharp timing. The music videos accompanying each track brought things to a new level and the show ran for a record-breaking 70 minutes. The various lines about how you know you might be "Moderately Successful" are still with me now.

Post-show it was time for drinks at the bar and a chat with Rob and the audience members. It turned out three Irish guys had come after being given the tickets by "some guy we hardly knew" in a pub the weekend before. They seemed more than happy to have taken a punt.

Should you be in Edinburgh this summer definitely track down Rob's show:
https://tickets.edfringe.com/whats-on/abandoman-s-rob-broderick-the-musical-in-my-mind
Posted by Andyquirk at 03:46 No comments:

Bear Jokes @ Pub on the Park 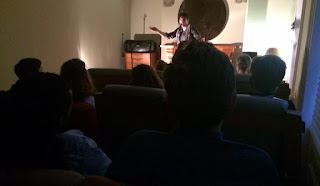 Last week I was back at Pub on the Park for Jon Long's Edinburgh preview and things looked positive from the start. The sun was shining, the pub was busy and some of the drinkers were actually there to see the night's events.

The first half was a whistle-stop tour of talent with Vivienne Kay, Jonny Gillam, Cecilia Delatori and Daniel Offen all putting in strong sets to the first few rows of smiling sofa surfers. My own opening seemed to go down well and Modern Man made it from start to finish without a dropped word or mistimed foot stomp. I was originally unsure of how this song would work but with every airing it just gets better.

The room had swelled to standing room only by the time Jon Long took to the stage. An effortless fifty minutes then ensued through a mixture of storytelling and songs. Some of the material was familiar from 2016 but there were plenty of new pieces mixed into the formula too. After an unexpected costume change and re-change, the show ended with a thoroughly surreal parachuting story crescendoing in a pun I recognised but, by his own admission, most of the audience were unlikely to get. This deliberate act of fallibility doing exactly as intended and warming the audience further to him. If you're up in Ed this summer you should definitely go to his show.

In the run-up to Ed2017 I'm publishing lip sync videos to some of my songs - standing at 52 and 24 views respectively they're not exactly gone viral but if you'd like to have a look and may be even share...

Andy Onions and I are also doing out final previews this Sunday at The Leyton Star between 3pm and 5pm. Free entry. Please come if you're in the area and fancy some better-than-cheap laughs!