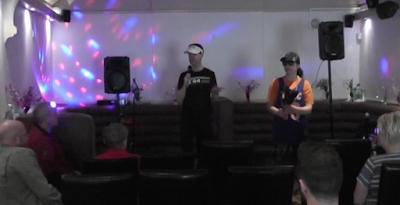 When people mention the words "comedy festival" they usually first think of the Edinburgh Fringe. For those in the know they may also think of Bath, Brighton and even Camden.

What they are unlikely to think of is a small town in South Wales best known for having an unusual name and close proximity to some good countryside. However, who knows, in years to come maybe the words "Fringe Festival" and "Merthyr Tydfil" will become totally synonymous.

Merthyr (as all the locals tend to shorten it to) is an ex-mining town with fiercely proud (and generally quite fierce full stop) locals, more pubs that you might expect and one extremely active comedian-turned-promoter, Drew Taylor. Not for Drew the idea of starting small and growing year on year, instead the first ever festival of its kind in the town stretched across seven venues - albeit for a single Saturday.

We arrived a couple of days in advance and did our bit on the first night by drinking with the handful of locals we found in our venue, The Brunswick. Tales of all kinds followed and we somewhat inevitably saw out the night in the local nightspot, The Vulcan Bar. It's been a while since I've seen so many incredibly inebriated teenagers stumble about to music that included a dance remix of Stand By Me and a DJ who merrily shouted over pretty much every track. Craft ale was out. Cans of Carling for £2 were in.

And in the case of many of the attendees, back out again shortly after that.

The following night we watched the opening event at the local labour club. The acts were good and it was handy I was able to flyer the assembled in-the-know locals. Could we possibly pack out our modest little pub space?

The answer to that, as you may have guessed from the photo, was no. Despite flyering the town centre market for two hours beforehand we peaked at six people - all of which were either pub regulars or related to Lisa, our bubbly landlady. We performed like we were at Wembley regardless and took a better bucket at the end than Bear Jokes usually does.

As a practice-run to the larger festivals it was invaluable too. There's nothing like trying to keep a verging on paralytic local who keeps making "jokes" about Syria in the flow whilst balancing this against the needs of someone's thirteen year old son. Anna J's dance routines stepped up another level and were bigger and bolder than ever whilst the new songs slotted in comfortably with the tracks which to us now feel like old standards.

Post-show we dropped our stuff off back to our very nice B&B before watching Andy Onions work his Powerpointless gold to a family of four and the now even more disinhibited local. Following that it was over to the back room of a pizza restaurant to see Aaron Simmonds and then Adele Cliff before finishing up at the closing show at the Redhouse Theatre to see Norman Lovett, Simon Donald and Barbara Nice.

Was our trip a roaring success by regular standards? Probably not. But when you've spent three days in good company seeing through a decent preview and not been choked by the toxic air of Waltham Forest it's been well worth it.
Posted by Andyquirk at 11:18 No comments:

The Freedom Fridge @ The Rose and Crown

Andy Onions always looks to put on a good show and so with a bank holiday spring in our step Anna and I headed to deepest darkest Kentish Town to try out a new song and our new somewhat theatrical links between tracks. If you haven't been before, the Freedom Fridge is based in an unassuming little cellar under a pub now embellished with a massive lit up sign that says "Me" on the back wall. Which is nicely in keeping with the vibe of stand-up.

Act-wise there were plenty of newcomers feeling their way through their first five minutes plus some experienced hands topping and tailing the sets. David Tsonos did some sterling work around cats and Dave Green had a good chair story. Onions himself presented a section of his rebooted Powerpointless with extra lemmings and someone did a rap about Whatsapp groups. We came to the stage in the second half fairly relaxed to an audience that was clearly keener on the occasional laugh and a polite round of applause at the end.

Following an in depth chat about being a Facebook legend with a random member of the audience, Clicking Like hit the spot as it usually does and we were into a link about house parties that worked well enough. New track, Gentrifried, then got its first airing and I forgot one and half lines in total. A new record for me given every time I've debuted a track before I've usually lost half of them before I even get to the chorus. The reaction was varied, people a little more self conscious about having to actually sing rather than shout or make noises but at its core it worked well and probably needs a couple of minor tweaks before next time. There's no rap in it. Possible signs of a change in direction post-Edinburgh this year.

Come half ten the show was over and it was up to the bar for a chat and a pint before the long and winding Uber home. Merthyr Tydfil in two week's time. We're looking forward to it.
Posted by Andyquirk at 09:46 No comments: