Monkey Business at The Camden Eye 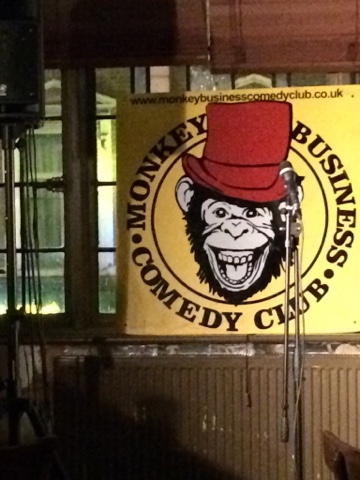 Monkey Business is a name in comedy I'd heard about a lot and so with great interest I approached this gig in Camden. With an £8 door charge it had the air of a pro night and sure enough there was a nice backdrop and an actual stage light in place.

The crowd wasn't huge but it was "real" rather than just acts and that made a huge difference. I opened proceedings and delivered Tales of the Unexpected and 1 Shot before being invited to encore with a third. West End went down similarly well and for a room of 15 we made an impressive amount of noise.

Alongside Maggie Kowalski (a Famous First Words regular) were a bunch of acts I'd never seen before. All put in decent 5-10s and the night closed with Louis Shafer. I had an interesting chat about the state of the London comedy circuit with promoter Martin afterwards and then headed home.
Posted by Andyquirk at 16:06 No comments:

Famous First Words at The Gunners 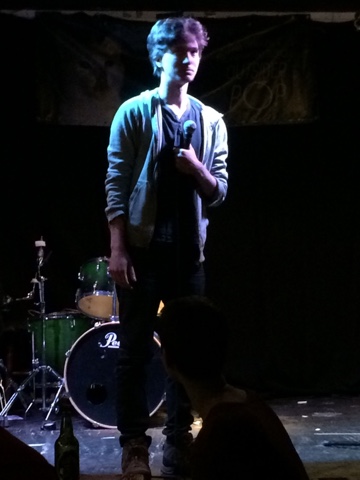 Another record breaking night for FFW with no less than 21 acts taking the stage in the space of 2:20. Technical issues didn't raise their head and the sets were universally solid with a dozen or so stand-out turns.

My debut performance of Shuffle and Stop was well received even if I did forget most of both verses. This after rehearsing it something like 20 times today. As a rule I always totally balls up my first performance of any new material and FFW is definitely the place for that to happen as the crowd are so bloody nice regardless.

(Photographed: Jonny Gillam)
Posted by Andyquirk at 16:46 No comments:

Sunday Shtick at The Rose and Crown 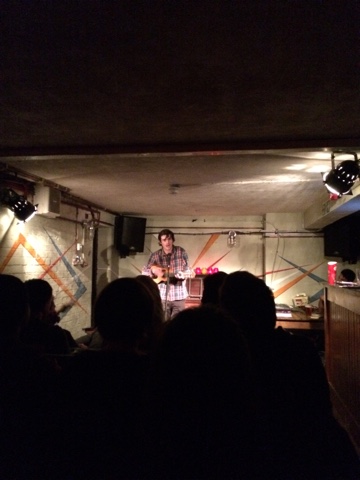 The most important thing I learned tonight at Sunday Shtick at The Rose and Crown: do no go on a boozy bender with Andy Onions the night before a gig.

I knew I was feeling pretty tired. So tired, it turns out, that my memory lapsed 5 seconds into Tales of the Unexpected and instead of kicking off with the first line as planned I instead went "werrgh, I can't remember the words" and stared at host Sasha with the intensity of a man on the absolute brink.

Thankfully, what felt like hours turned out to be the most panicked seconds of my life and I picked things up by the second line. The crowd didn't seem to mind and the rest of the set went ahead without further mishaps. West End finally got laughs after the line about having your debit card skimmed - which I've always been quite proud of but consistently disappointed by various audiences non-reactions.

The other acts were generally pretty good and Sasha and her co-promoter have a great thing going on. Getting a full room in Kentish Town on a Sunday night is not something to be sniffed at.

(Photographed: Jon Long opening the show)
Posted by Andyquirk at 16:37 No comments:

Famous First Words at The Gunners 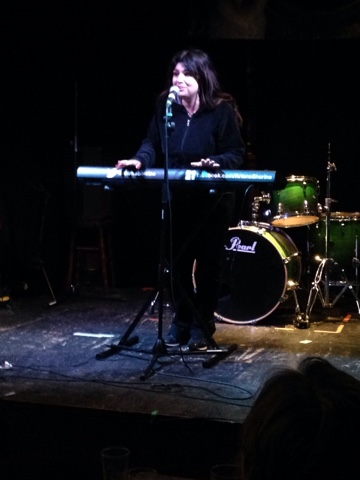 Tonight was my turn to host FFW and after a minor nightmare setting up the sound we kicked off bang on 8pm. The acts were really good on the whole and we had a nice little selection of actual audience too.

My rhyming couplet intros seemed to keep things flowing well enough and the crowd were more than up for joining in with my tracks that opened each half. Three acts went as far as to quote bits of Craft Fair in their set, officially making it an ear worm by my reckoning.

Spoonful of Poison at The King Eddie 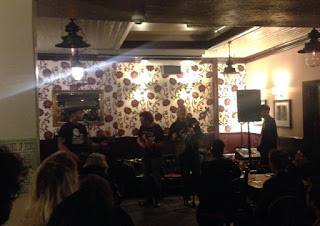 Open Mic nights on a Saturday are few and far between so it was with great anticipation I awaited the return of Spoonful of Poison in its new Stratford home of the King Edward pub. For those who don't remember the original incarnation, Spoonful ran for many years and brought every eccentric from across the capital together to enjoy a night of punk poetry, haphazard magic, experimental music and general shouting. I met Emily Capell at a Spoonful night and went on to manage her, and the band we recruited, for over a year. I met Dangerous T at Spoonful. It is a night of historical importance to me.

It is also the only open mic I know of who had to put in their written expectations that no-one was allowed to take a dump on the stage.

So what was it like? The acts were as varied as I had expected with some old familiar faces returning to the stage. The audience were chatty, drunk and very much the embodiment of the original Stratford rather than the Westfield East-ised version with it's unaffordable flat developments and twenty gazillion pound infrastructure revamps. Heck, even Unique Technique was in attendance to support his mate Scope MC (if this means nothing to you don't worry about it, its not a story worth retelling).

I did three tracks to an audience who largely had to be coerced into participating but for every person who stared into their drink or shouted over to their mate, another laughed in the right place or shouted "two shots" on cue. In short, what you might expect from a crowd of east enders wondering what on earth had ushered in a ramshackle mob of the artsy, strange, earnest and bizarre. I will return.

Posted by Andyquirk at 07:05 No comments:

Bear Jokes at Pub on the Park 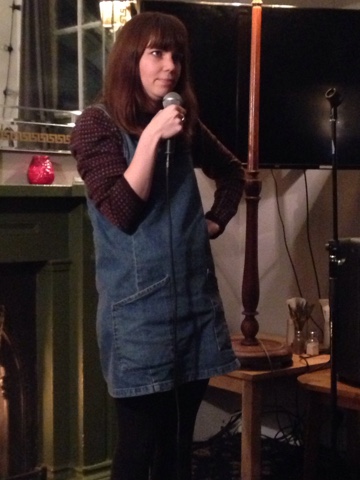 Last night's Bear Jokes proved February's show wasn't a fluke. The room was full as I kicked things off and they continued to whoop, cheer and have a good time throughout. The experience of those on stage really came through with their ability to bounce off the audience, including an impressively drunk older man.

There was plenty of variety too. Amongst others; Sophie Henderson talked the perils of yoga, Nick Hall did an extract from his new one-man spoof spy thriller based on scrabble, Jon Long sang about strange things in the recycling and Gatis Kandis was his usual disarming self.

I wrapped things up with the audience-involving thank-you rap where the assembled provided the percussion and the mailing list collected a pile of names for the first time ever.

(Pictured: Sophie Henderson)
Posted by Andyquirk at 23:52 No comments: