Folked Up at Palm2, Hackney 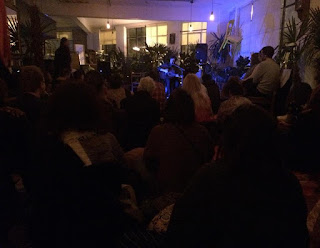 Thursdays are usually spent at Bear Jokes or slowly working through my admin email (for Bear Jokes) so this particular Thursday was somewhat of a novelty. We were headlining Folked Up, a music and spoken word night held above the legendary Palm2 on Lower Clapton Road, Hackney. An institution as much as a convenience store, Palm2 has reacted to the introduction of a much-despised Tesco Metro on its doorstep in the only way a Hackney business can - with art.

Folked Up is fantastically new-Hackney in every sense. From the unusual decor of house plants and a chair hanging from the ceiling, to the art installation on one side of the room and the throws all over the floor for the audience to sit on, it was hipster to the core.

We were headlining and so got to see a whole range of heartfelt poetry, observational commentary and well considered acoustic music before our 10pm slot. Come the time, the sizeable crowd seemed intrigued and after a bit of a chat we broke them in with Shuffle and Stop, followed up with a rousing Meal Deal, blew the doors off with Clicking Like (the PA being truly turned to 11) and concluded with an all inclusive West End - an easy win in East London.

In other news, our video from the Musical Comedy Awards is online now here.
Posted by Andyquirk at 05:47 No comments:

The Musical Comedy Awards at The Phoenix 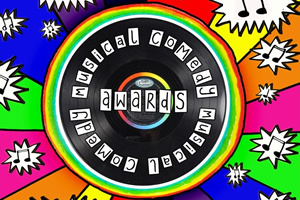 Last weekend we performed in the opening heat of the Musical Comedy Awards and although we didn't go through (sorry, spoiler) we learned plenty and enjoyed ourselves regardless.

Now in its tenth year, the MCAs have earned a good name for themselves having been part of the start of many successful career acts. Their marketing is spot on as could be seen from the capacity crowd of a hundred and their sense of fairness also came through with every punter getting more than one vote so as not to tip the balance in favour of whoever brought the most support. Tech was excellent and the bar food not bad at all. You can rarely go wrong with a burger.

After a fair first half the talent quota shot up markedly in the second, enhanced by the drinks flowing and thus the laughs less inhibited. We were sandwiched in this end of the show and did what we could with Shuffle and Stop and a fair bit of crowd work to get them in the mood (video here). What was apparent was that most acts backed away from their full length songs though and went for tightly edited highlights instead. This made their sets seem fuller and brought out laughs more regularly. Having never done a competition before this "greatest hits" approach was a novelty for us and one we'll have to adopt should we enter again in the future.

Award show over it was off to an overpriced Chinese in Soho with Andy Onions before a few drinks and an Uber home. Drunker but wiser to the ways of the comedy competition.

In sharp contrast we headline Folked Up at Palm2 in Clapton (Hackney) tomorrow with a twenty minute set. If you're in the area and have a fiver to spend feel free to come and shout along with us!
Posted by Andyquirk at 12:12 No comments:

Bear Jokes at The Leyton Star 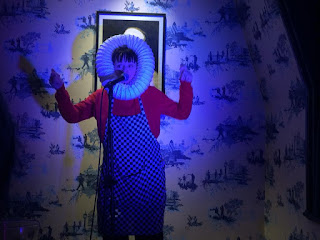 Bear Jokes has had a rough old time of late with the Christmas and new year battering audience numbers but last Thursday's event showed the fresh shoots of a spring-style recovery with cheerful couples in attendance looking for something to lift their January blues.

The line-up had plenty of variety and, of course, bucketloads of talent. Whether it was Cheeky Kita going for surrealist impressions (see photo), Dan Attfield singing London Underground based love songs or David McIver introducing his fantastically awkward Shy Man character there was nothing not to like in our comedy broom cupboard. For my part I dusted off a reinvigorated Shuffle and Stop and confirmed that Meal Deal is a bona fide classic. I have an avalanche of Edinburgh previews booked from March onwards which will no doubt pack the room and give Leyton something to laugh about as we all slide into a Brexit related collapse by the summer. Ian Lane headlines the next show on Feb 1st - which is also the start of my birthday weekend so perhaps I'll see you there as I'm more than likely disappearing to the coast the next day to clear the smog from my lungs.

Today Anna and I are off to the Musical Comedy Awards opening round to see if we can make a hundred comedy fans smile enough to give us their vote then next Thursday we have a twenty minute set in Hackney for Folked Up. The festival calendar is filling up nicely with appearances booked for Brigton Fringe, Hastings Comedy Festival and the Merthr Tydfil Comedy Weekend. We should know where we are for Edinburgh this year by the start of February too.

It's all so exciting I bought no less than four different retro computer t-shirts today for stage wear. Yes, four.
Posted by Andyquirk at 04:06 No comments:

Last week I found myself at two east London gigs. The first was my own Bear Jokes whilst the second was Peter Merriment’s Comedy Beast in Bromley by Bow.

Bear Jokes had a storming lineup with great new material on offer. The minimal crowd didn’t detract from this but more bums on seats would have been better.

London gigs with large audiences appear to neatly divide between newbie “bringer” nights with 15+ acts doing 5 minutes each with a friend in tow a contractual obligation and pro shows with names off the telly charging big money.

Low cost / pay what you want shows with high quality established circuit acts, Bear Jokes being one, find themselves full one night and empty the next on the whim of the great British public. It’s a challenge and should anyone have any fresh ideas I’m all ears as there has to be a middle in this turnout sandwich somewhere.

By contrast, Comedy Beast was packed out thanks to its bringer policy for all but a handful of more established acts doing longer sets (Anna and I included). The newbies were of decent quality and with Ali Woods on MC duties it all hung together rather well. We nailed two songs in eight minutes in optimistic readiness for the Musical Comedy Awards semi-finals (at 6 minutes the opening heat will be a single song job) and had plenty of good feedback from the crowd. Peter, you are a legend.

So is the person who, according to my download site, bought the FWP album on iTunes in the last month. I figured we’d all gone to streaming by now. £4 in the bank. Kerching.
Posted by Andyquirk at 07:55 No comments: