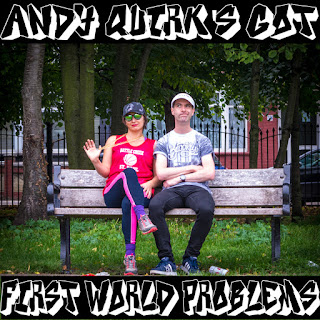 Missionaries for the mildly annoyed, Andy Quirk and his Lead Backup Dancer, Anna J, travel the country railing against the frustrations of modern living. Bad nights out, retail nightmares and hipster excess all get a withering tongue lashing.

Despite claiming to head up a large crew, Anna's dancers are suspiciously absent at every show and so it falls to the audience to take their place as backing singers, percussionists and whatever else is required. Active and raucous with a chalk and cheese narrative between rapper and dancer, it's a show that has seen Anna and Andy take their message all over the UK.

The duo performed full runs at the 2017, 2018 and 2019 Edinburgh Fringe Festival and also appeared at numerous others including Brighton, Buxton, Greater Manchester, Guildford, Hastings, Leicester, Merthyr Tydfil, and Morecambe. They also performed at the 2018 Eden Festival. They have also appeared at, and often headlined, countless club shows. To date, they have released two albums, available on Spotify and Apple Music.

If you've ever thought you might need some group therapy for the everyday frustrations of modern living be assured there's room in the crew for you!

Reviews​​
​
"Part comedy show, part rap gig, part group therapy, Andy Quirk and Anna J present an hour of musical nonsense where self-consciousness is left at the door marked Silly Good Times. Wrigley LOVES this show. Anna J’s surly rapper routine is hilarious."
☆You should be first in the queue for this☆
Fringepig

“Full marks for flow and audience participation, everybody leaving energised and happy. A sure fire Edinburgh hit!” ☆ ☆☆☆ – Lancashire Post

“99 First World Problems is fun, funny and quite a nice break out of the main hustle and bustle of busy Royal Mile. If you want a laid back, enjoyable show you can get involved with, then this is it.” – Get the Chance

“The relationship between duo and audience member, built from the very beginning of the show, pays dividends throughout…The awareness from one performer to the other within the songs makes for a polished performance.” – Buxton Fringe Festival Reviews

"...delivers with infectious enthusiasm...demolishing any walls of self-consciousness...and he’s even got a backing dancer with moody sass to help build the atmosphere."
Chortle
"Everyone needs to go and check you out."
Shell Zenner, The Dead Good Show, BBC Radio Manchester