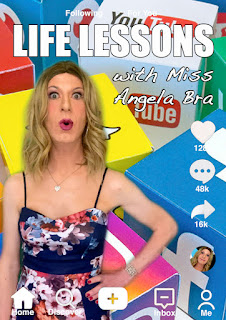 Angela Bra (pronounced like 'candelabra' and equally classy) is 32 and has been so for many years. Growing up in Southend she moved to Manchester in 2018 to follow her dreams of social media stardom (and because houses were a lot cheaper.)  When not publishing epic music videos and jokes to TikTok, Instagram and Youtube, Angela is the resident MC for Manchester party bingo night, Bop & Bingo and her own shows both online and in person. She performs at comedy nights, cabaret nights and anywhere else that offers her a stage and the chance to show off.

In her spare time, Angela likes dancing, taking selfies and Pinot Grigio (which are also the names of her two cats.) She dislikes brocolli and people who walk too slow.

"Crowd pleasing...wordplay is enjoyably convoluted...a cheerily endearing persona...she will get you taking part, whatever your initial reluctance..." - Chortle

"Spending an hour in the company of Miss ‘Angela Bra’ is a lot of fun." - LouReviews

"Audience participation is a must and all duly obliged, with spontaneous wit and humour evident of both sides. I don’t think there was anyone who didn’t like the show." - Buxton Fringe Review

"The lyrics are clever...with plenty of audience participation, including Angela’s own amusing take on musical statues, it's all in good fun and you won’t begrudge the hour spent in her company." - North West End UK

Angela Bra is the drag alter-ego of gender fluid comedian Andy Quirk, winner of Best Musical Comedy at The Morecambe Fringe (2020) for the show, "Parodies from the Peak District" and one half of the comedy rap show, "First World Problems" which completed three popular full runs at the Edinburgh Fringe Festival in 2017, 2018 and 2019.