Clash of the Tight Tens and a wedding party 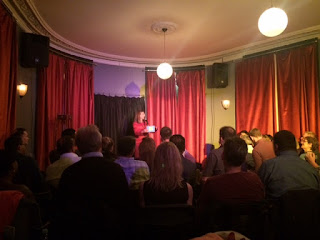 Gigs on both Friday and Saturday this week made for quite a weekend and each was special in its own way.

Returning to Clash of the Tight Tens for the first time since I largely handed it over to Sonia Aste to run (whilst I focus on the festival based version), I found a full room and a mild buzz in the air. The format has changed so that every other month the tens-only format is replaced by three acts doing tens whilst the rest of the night features people taking their first five minute steps on the circuit having graduated from comedy courses.

The result of this is that the newbies make up a reasonable part of the audience whilst colleagues, well wishers and other intrigued associates come to support and fill the room. It makes for a busy supportive atmosphere - even if the material and delivery on stage by the majority of acts is clearly a work in progress and very much at the open mic end of the comedy spectrum. Come the headline spot I hit the intro track and jogged up to the stage with Anna just behind. Though slow to start, the crowd warmed up once we hit the first song proper and by the time we were blasting Craft Fair out everything had pretty much fallen into place. Except the mic stand that had fallen into the crevice between the back of the stage and the wall. It's shallower than I remember.

Best new act of the night? An older gentleman wearing a swim cap with a cigarette in one ear who taped balloons to his nipples and shot an arrow at a volunteer who wore a wooden plank with a balloon attached. Worthy of a Malcolm Hardy Award any day of the week.

Come Saturday afternoon and it was off to Hackney Central for a wedding party to celebrate the joining of the king of the chuckle train, James Harris, and his partner Ke. Being a comedian the party couldn't help but have a comedy section and so alongside Victoria Howden, Ariane Sherine and a coupe of other acts Anna and I debuted new track Meal Deal and recent-ish addition Airport.

Both tracks went down well and Meal Deal looks to be a bit of a banker. The appropriation of several current trends in pop hiphop were duly recognised and appreciated by the younger end of the audience in particular. Whoever came up with the idea of replacing the off-beat disco hi-hat with a group of people going "hey" is most definitely a genius.

Later in the evening I received an email from Jolly Rogers in Rochester asking if we were still up for a return on November 30th. Having confirmed we'd be up for it I got this: 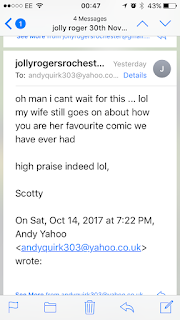 I hope Scotty and his wife don't mind me posting this. No review in the world tops things like it.
Posted by Andyquirk at 16:49 No comments: 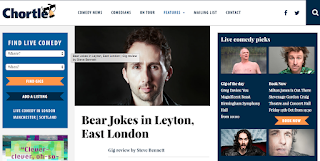 Last week was a bit of a milestone for all things Bear Jokes and First World Problems with both featuring in part of the same review by comedy bible Chortle. Editor Steve Bennett is known as a man not easily impressed so it was all the more satisfying to see him say positive things about both.

With such a good line-up last Thursday it would be hard not to receive some praise though. I could spend a few paragraphs writing in depth about what made each set so special but Chortle's already done it so feel free to follow the link above. Anna and I opened the first half with Tales of the Unexpected and closed it with Airport. My initial concerns about the jihad line have been laid to rest. Musically it's a strong track and I think the lyrics pretty much nail pre-flight tension so it's onwards to the next one. "Meal Deal" is set to debut at fellow Mirthquaker James Harris' wedding party this Saturday coming.

This Saturday just gone I found myself on a train heading to Cambridge for Stupidfest and a revival of the Edinburgh First World Problems fifty minute set. To keep things fresh I swapped in and out a few tracks, including Airport, but otherwise ran it as had been done throughout August. The turnout was in the single figures, which was a shame, but everyone there enjoyed it and yet another person said I should enter the Musical Comedy Awards this year (the last one being the guy who runs it). We're back at Clash of the Tight Tens for the first time in forever this coming Friday so we'll be recording our entry there. Thanks to Paul "man with a box" Richards for the Cambridge show - always nice to get out of London.
Posted by Andyquirk at 11:58 No comments: