500 Miles and The One And Only 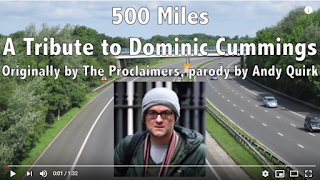 First of all, can I say a huge thankyou to everyone who's viewed 500 Miles and its follow-up Dom's The One And Only in the past few days. When I scribbled some half baked lyrics on a notepad on May 23rd I thought 500 Miles might prove popular enough to break the thousand views barrier.
36,000 views later and still rising, this is now the most watched video I've ever made by a margin of about 35,400. The Proclaimers may even make a few more pennies off their best known song and good luck to them for that.
It's been interesting to read the comments and see people come together enjoying the song, plugging their own or starting intense political debate and conspiracy theories around why this particular event has been so high profile in the news compared to transgressions by other political figures. Bless the lot of you - this song isn't going to change anything and neither will an angry rant in the comments section of a meme. Have you ever read the comments on Mail Online? I did yesterday for the first time and nearly lost a day. 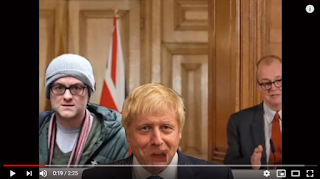 Yesterday morning, Anna and I came up with the concept of Dom's The One And Only over our morning coffee. Longer and technically a lot better (in true blogger style let's plug the products: Photoshop, iMovie, Garageband) - in the grand tradition of follow-ups to "hit singles" I fully expect it to do not nearly so well. Six hours of effort created this true work of art and art should be created for art's sake.
I'm joking. Please share the proverbials out of this :)
Elsewhere in comedy, thanks to those who gave feedback on the original tracks for At Home With Angela. The character's developing and I should have some kind of video series ready in a few months. Or whenever I stop making political parodies. I'm also working on a Parodies From The Peak District show for both Morecambe and Buxton Virtual Fringes this year. The green screen is going to get plenty of use that's for sure.
Posted by Andyquirk at 02:28