How's your week been? Covid-compliant comedy contined this week in a multitude of ways alongside the occasional raid on Aldi and walks when it wasn't raining.
Andy Quirk's Parodies From The Peak District Festival Show
With live comedy all but a distant memory with no sign of an imminent return several festivals this year have gone down the virtual route. With First World Problems in furlough, Disco Divorce Party back in the workshop and At Home With Angela only just becoming something; festival duties fell to the parodies set, a green screen and a bunch of plastic flowers. 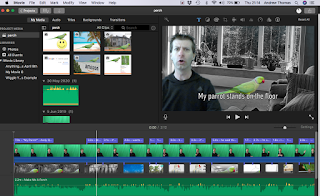 Recording the audio has been the easy bit. There are seven songs in the set plus "bonus" tracks in the form of the two Boris/Dominic Cummings videos I recently uploaded. In the space of three days I'd written bass and drum tracks to accompany the guitar and put enough reverb on my vocal to suggest I've recorded in a cave.
Given what I've learned from the Anything Goes Online Open Mic, sitting in front a camera and playling along to these songs in the lounge isn't going to cut it. Online audiences have attention spans attuned to short clips rather than anything longform unless the budget is appropriately broadcast-TV-sized.
My plan, each song presented with a short intro and then slotted together somewhat like an album. Each music video performed in front of a constantly changing green screen in a variety of costumes relavent to either the original recording artist, an association with them or with the song.
The end result should resemble in some ways a low budget Channel 5, "Top 100 TV adverts of all time," type clip show - with the exception that every wistful piece to camera about a clip the comedian or commentator had probably only seen shortly before recording their piece is taken by me on my iPhone somewhere in the Peak District.
Will it work? Who knows. These are experimental times. Buxton, Morecambe and New Mills Fringe Festivals are all on board for it - in essence providing a listing and link to my host page with the obligatory donate button positioned optimistically under the video screen.
Anything Goes Online Open Mic
Speaking of clip shows, AG goes from strength to strength with a modestly sized regular audience clicking through on a fortnightly basis to see what comedians have sent in. Many of the acts are becoming regulars too with Mark Rodrigues, Marty Gleeson and Tom Short appearing on all the shows so far. This week's show also has some polished stand-up from the annoyingly young Sam Serrano and a number of others who probably look back at their live clips like they're from a long-forgotten era.
Click to view
500 Miles / Dom's The One And Only
Proof, if needed, that timing is everything. 500 Miles came out the day after Dominic Cummings' trip up north became public knowledge. The video is somewhat thrown together and the audio was done in one take. Views to date: 62,000.
Dom's The One And Only came out three days later and, though more about Boris's defence of his advisor than Dom himself, scraped through the 1,000 mark yesterday despite a much superior video, audio recording and set of lyrics.
More will follow when a news story comes along that has the legs to run for a few days and I'm not still dancing about in front of a green screen dressed as a crap Morrissey. 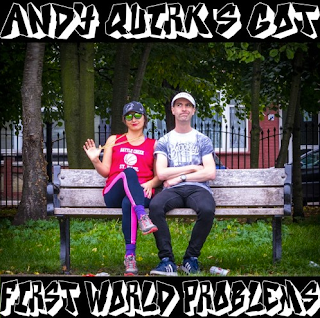 What about the "Rap Requests" in your subject line?
Ah yes, that. Yesterday I received a message out of the blue from someone who watched Andy Quirk's Got First World Problems three years ago in Brighton. Their boyfriend is turning thirty next week and they both still sing Airport to this day. She asked if I could record a birthday message or rap for him, which I'll be doing later today like a proper "celeb" once I've dusted off the FWP golf visor. To me, its little things like this that mean a lot more than any review or number of Youtube views possibly could.
Posted by Andyquirk at 04:47