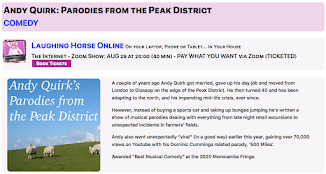 This evening Parodies from the Peak District got it's first proper live airing thanks to Laughing Horse and their virtual Edinburgh Fringe offering. I had no idea who would be buying up the tickets to see me pay homage / desecrate the hits of The Smiths, Erasure, The Zutons and others in a vague narrative of my life between 2018 and 2019. Come 8pm I had a Zoom gallery window largely made up of retired Americans and Australians - plus a few Brits.

When the first question posed by your audience is "Where is the Peak District?" you know that it's going to be an interesting 45 minutes. They were all an absolute joy of course and there's was plenty of chat between the songs. It had the vibe of one of the smallest festival rooms you get at the fringe where the fourth wall is so blurred its part theatre show / part dinner party minus the food. Except in this case people actively encourage you to get your guitar out and sing some songs.

I can now also say with some certainty that no-one outside the UK realised that Mark Ronson and Amy Winehouse didn't write Valerie. Educational and entertaining. 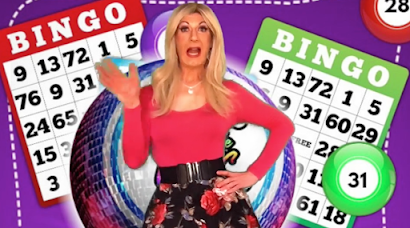 Elsewhere this week, project Angelabra continued with her first live outing as the featured comedy act at Bonkers Bingo - an all singing / all dancing Butlins-style cabaret with a few games of bingo thrown in for good measure. Nearly thwarted by unforseen circumstances the show went on and Angela spent a good portion of her set ribbing the tipsy but good-natured audience members at the front before cracking out I Love My Microwave and finding the same set of people singing along to the chorus.

Performing in pretty much the same outfit featured in the photo (a still from her advert for the night) it turned a few heads in what was an otherwise ultra-straight cocktail bar come gastropub but there was no grief or heckles that the reputation of a location like Bolton might suggest. Angela may actually be more mainstream than first thought. Or Bolton is more camp.