It's been a busy month or so since the last post. The tutoring continues to do well and every student who was with me during the school closure has opted to stick with me now they've reopened. Which makes for a busier Saturday but a less busy weekday daytime. I don't know for how long we'll be hearing about how children have to "catch up" due to the pandemic but I estimate it to be at least as long as the funding lasts and then it'll revert back to beating schools with a stick for not doing enough to "raise standards". 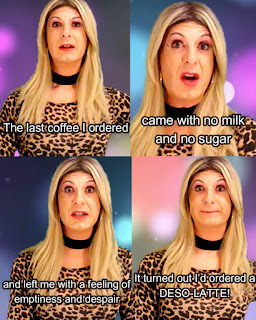 Comedy-wise the cogs have turned on TikTok (I'm so sorry.) A relentless regime of one liner pun writing and recording every week has started to pay off with one post now sitting around the 150,000 views mark. Others are in the tens of thousands and, fingers crossed, it'll stay that way. I've no doubt if jokes about noctural horses (night-mares) and coffees full of nothing but despair (deso-lattes) were told by Andy Quirk in regulation jumper and jeans then views would be in the single figures. But delivered by the deliberately awkward, filter-infested, social-media-will-eat-itself Angela Bra it clicks. Particularly with teenagers who express themselves in acronyms so long not even UrbanDictionary.com knows what they mean. You can experience her across every platform going now: Facebook / Instagram / TikTok

Angela has also got herself booked for a live show in Wales later this year and a full hour's performace at the Ram Festival in Derby at the end of May (most likely online through Zoom, possibly live in person.) More festival dates are being lined up but, for obvious reasons, little can be confirmed at the moment. 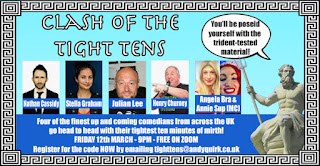 Elsewhere on the web, Angela Bra's Bonkers Quiz Night continues to welcome guests for a virtual pub quiz and Angela is now also hosting a revived Clash of the Tight Tens through Zoom every other Friday night. 4 acts, 10 minutes each and a live Zoom audience watching from all angles. The first one went really well with stella performances from Ali Woods, Alice Frick, Lucien Jack and David Eagle + 30 live attendees. The next week is this Friday. More info here.