Disclaimer: This evening there was a tube strike. Audience numbers quoted are therefore lower than they probably are under usual circumstances. 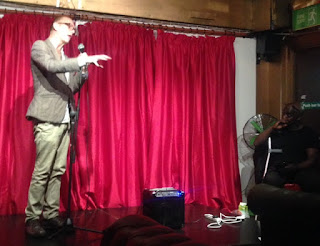 And so it was that at 6.55pm I cycled into the city and parked up to get a walk-in spot at Touching Cloth at The Water Poet, a lovely pub not far from Spitalfields Market. Dangerous T was MC and the downstairs room looked really good. Except for the "PA". Take a closer look at the photo and you'll see amplification for the night was provided by the world's smallest amplifier with a microphone plugged into it. Adequate for a quiet room if you're just using your voice. A minor disaster if you're Leyton's premier rapper of first world problems and your backing track trickles out marginally louder than through the inbuilt speaker on your phone.

At 7.55 there were 7 comedians chatting to each other wondering where the audience was. At this point I came up with the brilliant plan to open the all-too-subtle door at the top of the staircase to entice people in and....it worked! Well, we had six real audience within five minutes so it was a start. With 4/6ths of the audience busily eating their dinner, T started the show with some chat and I was on. It went about as well as you might expect. The comedians joined in the chorus to "1 Shot" along with the 2/6ths of the audience who weren't discussing who had the mayonnaise for the chips. The backing track sounded awful.

I then settled in for some of the worst comedy I've seen in a while. One guy actually turned on the minimal audience and wished one of them would die in a car accident. Thankfully, Haran X and the guy that followed him closed the show around 9pm with some material that actually engaged the punters (now mercifully finished with their dinner) and may have just convinced them that it might be worth chancing another free entry show sometime in the future.

That should have been it but then Haran suggested we carry on to another night and see if they had any spots going. I was about to "double up" for the first time... 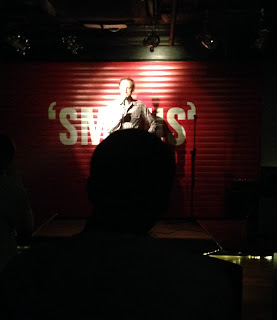 Smiths is a trendy looking bar on the perimeter of Spitalfields Market. Inside there was no-one but downstairs the comedy was in full swing. They may not have had many more real audience than at the Water Poet but the vibe was a hundred times better. The stage looked good, the PA was decent and the lighting was just right. The enthusiastic MC picked up the crowd (14 including acts) when someone's set died on stage and she gave both T and I spots at the end. Haran no doubt would have got one too had he not needed to leave to prepare for his trip to Edinburgh the next day.

True, to walk into a room where a man is talking whilst slowly taking all his clothes off might have disturbed some people but at the very least it screamed variety.

I closed the show with "1 Shot" and really enjoyed it this time around, the crowd and even the bar staff joined in with gusto. A place I'd definitely return to.
Posted by Andyquirk at 16:11