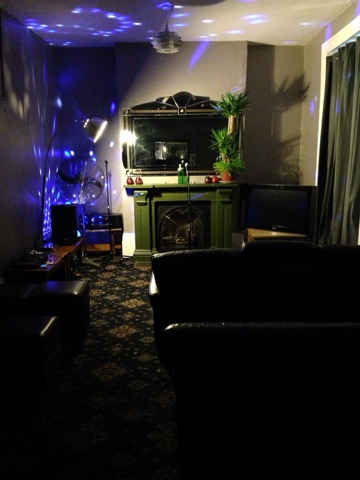 So this is the view pre-show of my room at Pub on the Park for Bear Jokes. The intimate space makes for a nice atmosphere whether it's packed or just moderately busy - as was the case last night.
With my mum, brother, sister-in-law and 3 month old nephew in attendance it was a bit of a family affair. The personal nature of the night was further compounded by having some of my most long-standing acts performing, including Andy Onions and Gatis Kandis.
The comedy certainly had some highs and lows, the latter not really a bad thing as refining new material is partly what the night's about so long as you throw some gold in along the way. Steve Hili did a great headline set whilst Rosie Holt went down so well I gave her an extra 2 minutes to make up for her short set at The Gunners the previous night.
As for me, I did a couple of tracks to open the show and got people clapping in the right places to Selfie Stick.
The curse of the previous night appears to have lifted, Bear Jokes is back entertaining actual people!
Posted by Andyquirk at 00:44 No comments: 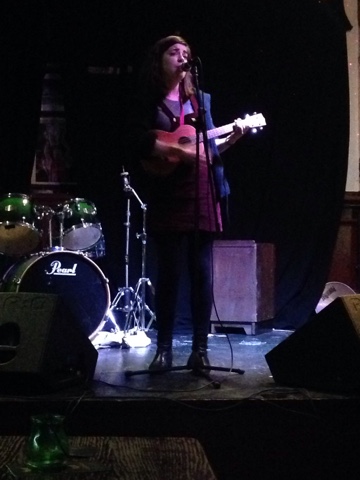 A number of familiar faces were at The Gunners last night. As usual, actual audience was thin on the ground but once some tech issues were sorted we strapped in for a night of Monday mirth.
With almost twenty minutes of stage time, Dangerous T ran through a greatest hits package and Jimbo pondered what a "known unknown" was for a similar length. My set went down well and later spots by Chris Joyce and Aaran Misaros were both witty and enjoyable. Despite only taking a modest six or so minutes stage time it was Rosie Holt (pictured) who made the night though. Ukulele comedy at its best and a genuinely funny person off stage as well as on.
Tonight also featured three dogs wandering around. One of which joined an act on stage for a while. You don't get that at The Comedy Cafe!
Posted by Andyquirk at 23:46 No comments: 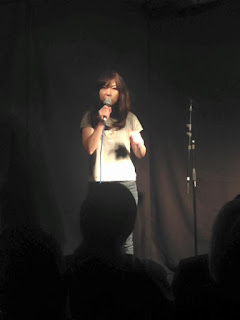 September so far has been a patchy month when it comes to audiences at every gig I've been to or, indeed, run and it was with this thought that I went into last night's Tight-Tens.

The venue had gone rugby crazy with every blackboard and poster urging you to watch the matches - leaving no space for any mention of the comedy going on below. Still, I carpeted the pub room in flyers (1,000+ still unused with this show being the last date on them), put up my posters and crossed my fingers the 30 attendees on the Meet-Up would show - a figure somewhat lower than on the previous two nights.

The room looked good and at 7.30 people started to arrive, with only a few looking confused and asking where the "live rugby" was that a badly positioned blackboard above the door leading down to my room was advertising. By 8pm most of the seats were taken and we were ready to begin.

Andy Onions MC'd energetically as ever and had people dancing to 90s europop within the first 3 minutes. My set went down well too with most of the room shouting along to the chorus to "1 Shot" and the acts that followed all did their thing with panache and style. The issue, however, was the audience reaction....or lack of it.

It seems to be a recurring theme now at this show that the sizable audience will always play their laughter cards very close to their chest. Rather than regularly laugh out loud they'll applaud enthusiastically at the end of a set and come and tell you how much they enjoyed it during the break or at the end. Some people who had to leave at the intermission even went so far as to apologise for their early exit and popped fivers in the donation bucket.

This approach to showing your appreciation is fine of course, as an audience member it's your right to express yourself as you see fit. However, it makes the work of the comedian on the stage right at that moment incredibly hard and I could see how they tried to deal with it in different ways. Some directly addressed the issue (risky, "hey this night's weird isn't it..."), some went straight into the audience to speak to them and get them involved (doubly risky as it made the set live or die on the responses from the audience) whilst others just carried on and trusted people were enjoying themselves regardless.

The final option was definitely the right one - confirmed by the audience feedback after the show. Note to anyone in comedy who finds themselves at a night which has a large contingent of MeetUp people at it though - don't accuse them of being incapable of making friends in a "normal" way. They might smile through it but you're setting back the normalisation of this very good social network for busy people in an often unfriendly city. I had drinks with part of the group after the show and they're some of the nicest and most interesting people I've met recently.

So was tonight a success? By the standard of comparable new act nights - an absolute yes. But I want Tight-Tens to be full every month, giving performers the chance to address 60+ "real audience" and giving that audience an experience of comedy that means they'll go to more new act nights in the future.

By that standard it's still a work in progress.

Posted by Andyquirk at 13:10 No comments: 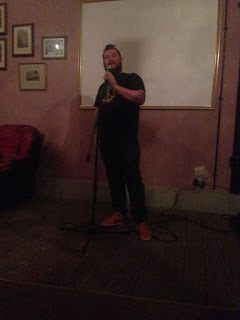 I like Hilarity in Shoes, and not just because it happens to be 10 minutes cycle from my place of work. It's the intimate friendly atmosphere that makes it - even if "real" audience can sometimes be rather thin on the ground.

Tonight there were a handful of non-participants in the room as things kicked off and Ian Lane did another excellent set. I followed and threw myself into my two tracks with a good-to-middling response from the assembled. My songs really do only half work if people aren't willing to join in and with participation somewhat quiet, though not inaudible, I returned to my seat only slightly more pumped than when I left it.

Towards the end of the first half the people who made up much of the "real" audience turned out to be very drunk. One woman was in an easily riled state of mind and took a character act's ill-judged joke about Uber and sexual assault to be his actual opinion and walked out calling him a "piece of shit". With the energy now thoroughly sucked out the room the last act of the half did his best to claw it back but it lead to a shifty break and a muted second half.

On the plus side though, one of the acts turned out to be the parent of a couple of children at my school so that lead to an interesting conversation.
Posted by Andyquirk at 15:28 No comments:

The pub was unusually quiet, four of the acts had pulled out at the last minute and one of the speakers had gone awol yet Bear Jokes rolled on. Just. I've heard about when shows have become workshops - where the audience is pretty much just acts critiquing each other's new material but had never come close to that scenario at one of my own. Until last night. Disappointing in many ways of course but it was a novel and in many ways productive experience. I'd just rather it never happened again.
Posted by Andyquirk at 14:05 No comments: 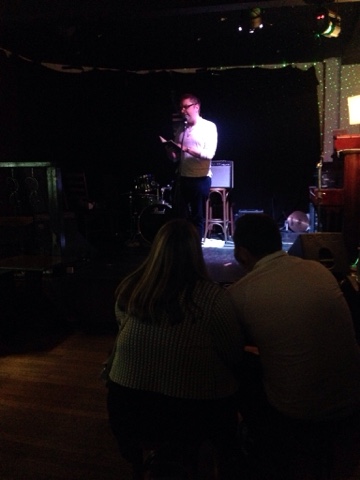 Another nice night at The Gunners tonight with a small but friendly audience and a stream of thoroughly decent acts. Tales of The Unexpected went more smoothly this time as I adopted my Gary Numan voice for the chorus with gusto.
Also, for the first time ever when I asked the audience to name a first world problem the response actually matched one of my tracks. Though it has to be the first time I've ever heard the photo rods of ego doom referred to as "cellphone sticks".
Posted by Andyquirk at 14:00 No comments: 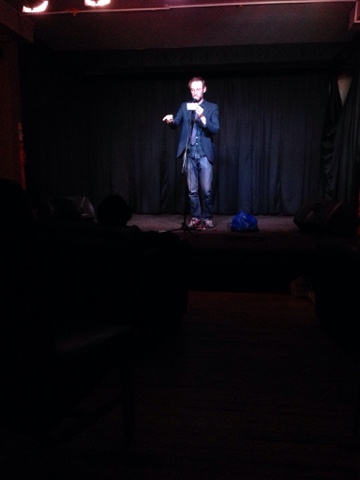 After an August break The Comedians Club was back in business at Leytonstone's Plough & Harrow with many of the same acts i'd performed with before and a second half handed over to Carmen Ali and Jake Pickford's Edinburgh show.
As has always been the case, the venue looked pretty sparsely populated throughout but when a room is designed for 150 anything less than 50 is never going to look great. Never mind when it's more like 15.
The energy level in the room wasn't far off that of a dying battery as the first few acts did their best to pick it up and my set, coming midway through the first half, faired only moderately better. People joined in 1 Shot's chorus and clapped in the right places for Selfie Stick. They were quite forgiving even when my vocal went way off piste on new track Tales of the Unexpected Item in the Bagging Area. Overall, however, it was one of those nights where people came up afterwards to say they enjoyed your set  rather than show it at the time.
Carmen and Jake's Edinburgh show in the second half went down well - feeling punchier than when I saw it in Scotland. Doing it earlier than the 11pm slot they had up there and getting a bigger stage seemed key to me.
Overall a lovely, though not lively, night. Leytonstone needs to wake up to it before they lose it.
Posted by Andyquirk at 00:47 No comments:

So this morning I had a Facebook friend request from the original singer in my last band, HotBeds, from about six years ago. A quick glance at her profile revealed she now works in "Financial Domination" - which involves going online, telling men they're scum, making them doing humiliating things to themselves and then getting them to send her money and gifts.

It reminded me of my 2011 acoustic unsigned chart "hit" in 2011, long before I'd concluded that if I rapped I would not only have to no longer worry about the quality of my singing but that I wouldn't have to lug a guitar around everywhere.

And yes, I had disco lights even then.