Stand In for Stand Up 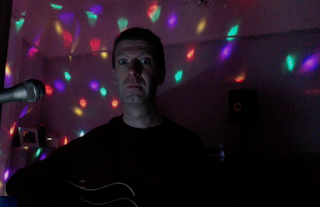 So it was on Friday that Boris made it official that even if anyone was mad enough to consider running a comedy night in these going-viral-is-now-a-bad-thing times the door was shut on events venues, pubs and anywhere else a comedian might attempt the rise a laugh from an assembled mob. The emails and updates began to pour in from promoters here, there and everywhere. Comedy was cancelled.

Or was it? Comedians are a creative bunch by their very nature and faced without being able to gain the attention and approval of strangers on a regular basis they mind-cogs started to turn and "virtual gigs" started to be proposed across social media. Kev of the now-cancelled Didsbury Comedy Festival was one of the first to come through with a solid plan and so yesterday I turned the front room into a disco and performed "I Will Eat Pies" for anyone who's missing their fix of acoustic parody action. When the full show is up for stream and download I'll post a link here.

In a similar vein I also had to look at what would happen to Anything Goes Open Mic for the foreseeable future. Unwilling to just sack it off I've gone down an, admittedly less sophisticated, virtual gig route and invited those on the AG performers' mailing list to upload 5-10 minutes of mirth to Youtube and send me the link so that on April 9th (the date for the original real-life AG, postponed due to a now-cancelled holiday abroad) I can present a playlist of new act / material talent through my numerous social media streams (and ask acts to do the same.) This is open mic and literally Anything Goes so if you want to get in on the action drop me an email. It won't have the same vibe as a wet and windy Thursday night in a dark room the size of a lounge but you can't have everything.

In Disco Divorce Party news, we tore up the script last night and have started again. At least we have plenty of time though before Edinburgh. Potentially 16 months...
Posted by Andyquirk at 10:07