Last Thursday I broke my covid enforced stage absence with a show in Manchester for new act / new material show The Laughienda. Based at The Lions Den on Deansgate the beer was ordered from the bar by text message and the audience were socially distanced only in the physical sense. In short, a nice little night. 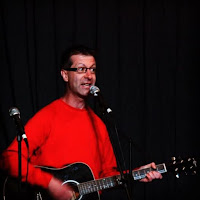 Overall it was thoroughly entertaining with a number of more experienced hands stretching their stand-up wings once again. Ben Silver and Hannah Platt performed either side of me in the final segment and both were great to watch. Also, it's also nice to see Adam Hughes, on MC duties, hasn't let fatherhood or lockdown change his raucous rambling approach to crowd work and drinking on the job.

My own set gained momentum after a slightly shaky start with 500 Miles, making its live debut as the mic stand recoiled and forced me to pretty much stand over it to be heard, before I gave it a few determined twists and tugs and knocked out Stuck in the Lidl With You and Ex On Fire like the stalwarts they really are now they form the core of my Parodies from the Peak District show.

By 9:50pm the show had run and we were outside the venue - the audience using the QR code posters to donate to the night. Laughienda is every Thursday night at The Lions Den from 7pm. Entry is free and you should definitely go. 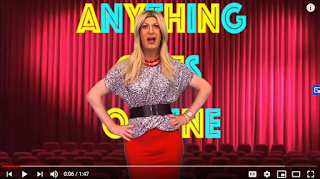 Back in the virtual world, Anything Goes Online put out it's October show with Angela Bra on MC duties. So far it's clocked up 74 views. Small beer to most people but it's more than the last one and well worth a watch!