Getting "High" In Manchester

When people create scales they usually have a ranking that runs from low to high. But the people in government are not usual people. They have a ranking system that starts at "medium" and then climbs to "high" and "very high" in a move somewhat reminiscent of a certain minister who in the past said all schools should have "above average" results.

Manchester is "high" (insert obvious joke) which, though not as bad as the tier above, is still pretty grim for bars and similar venues. Yes, you can get a drink. No, you can't drink it with anyone outside of your household. 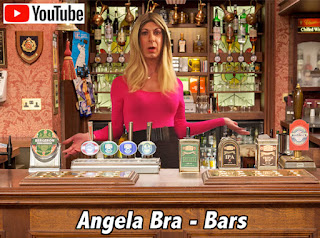 So Bonkers Bingo in Stalybridge this Friday is still on and, presumably, now reduced to a weird take on Family Fortunes. This does mean that Angela's latest videos promoting the show, and her MCing of it, have not been made completely in vain. 'Balls Balls Balls' has clocked up over 400 views on Facebook Video whilst 'Sani-Tiger' is heading that way with an additional 200 eyeballs on Youtube. Her latest track - the closest she's ever going to get to writing a protest song, 'Bars,' had 100 Youtube views in 24 hours + another 50 or so through Facebook. Whether songs do better on Facebook Video or Youtube, and if FB better promote content it hosts, is an experiment in progress for me. Currently, there's no clear winner.

What I do know is that the most watched video of Angela's on Instagram TV comes in at 28 views. Clearly there's still some way to go before she becomes a social media sensation.

And before you ask. Yes, as well as views the videos do actually have likes. And yes, I have grown my subscribers by a modest but much valued amount.

Elsewhere in comedy, Retfest is on in two weekends' time and Parodies from the Peak District will be showing in video form. There's also a chance I'll be doing something more live for them in the run-up to it next week. With the chance of live shows further diminished by Boris's flipflopping I'm pretty much a streamer for hire for as long as this cruddy situation continues.