Can I ask you a question?

Occasionally I make a decision that pans out for the best in retrospect. Two weeks ago, feeling frustrated, I started to make enquiries with the various bars in Glossop about running a covid-safe comedy night as the town was in tier two and with any luck would be moving down a rung within the month. 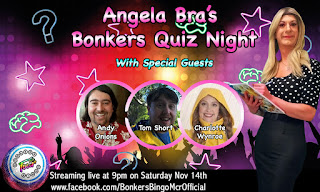 Then it occurred to me that this could be a lot of work for something that wouldn't happen so I retreated back to the box room office to think again. Days later Bonkers Bingo were on the phone to tell me that all the November shows were being punted into 2021 and could I think of anything that Angela could do to entertain the substantial army of Facebook followers they'd be amassing.

Now, I've always liked a pub quiz. I've always liked a gameshow. Not the daytime ones with real questions and actual tactics but the cheesy bombastic ones where previous rounds become irrelevent as the money doubles. Family Fortunes is king when it comes to this, Catchphrase and it's increasingly obscure non-sayings is heir to the throne and Pointless is most likely the court jester with its attempts to add marginally higher brow content through the veil of 100% silly.

Pub quizzes are great too because you get to join in. But the catch is they can go on forever and the questions are often far too challenging for mere mortals. There's also the issue with people cheating on their mobiles. The i-phoneys of the egghead world.

So I've started work on a gameshow pub quiz for these lockdown times. Some rounds will appeal to know-it-alls, others are more so for those who preferred their gameshows with a gunge tank. You might get all the questions right. You might not. There's no point in cheating because there aren't any prizes and if you're on your own you can chat with others by commenting on the Facebook stream and watching the "special guests" (also known as locked down comedians) on screen with Angela.

At a technical level there's an audio mixer for background music, a green screen and a video round. Will it all work properly? Probably not. But Angela isn't so good with the tech and she'll no doubt ride it out in style.

Angela Bra's Bonkers Quiz Night streams on the FB page for Bonkers Bingo - The Tour from 8.45pm with the quiz kicking off at 9pm and runs for a solidly manic 60 minutes on Saturday November 14th. Pop it in your diary by joining the event here. 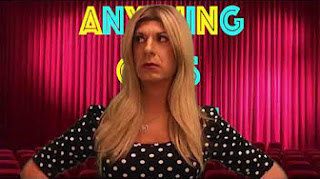 Elsewhere on the internet, the November edition of Anything Goes Online went live and has already had more views that any of the previous three did in a month. It could be the quality. It's more likely that no-one can go anywhere. If you fancy a fix of new acts and new material from across the UK the playlist starts here!

I'll leave this with a joke that popped into my head this afternoon when Anna showed me a photo taken during her walk in a churchyard. No, I don't want to know who thought of it first hundreds of years ago! 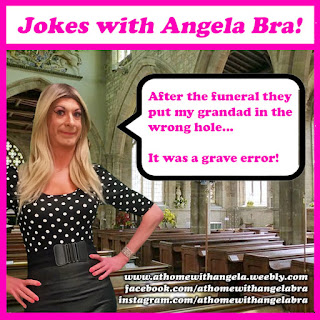