A Weekend of Quizzes

It's been a busy couple of days full of clever questions and occasionally clever answers as Angela Bra has both competed in and hosted a quiz show this weekend. In the run up to this there was much chaos on the hosting front as I got to grips with Streamyard, question writing and the best way to stream to ensure no-one appeared as a blurry collection of pixels. Overall, it work out pretty well. 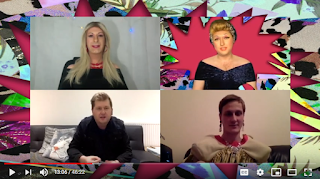 First stop was on Friday night when I took part in Kate Bouquet's On The Game, an improv panel show hosted by drag superstar Kate Bouquet and in the company of a couple of stand up comics. Getting the brain in gear took most of the first round but after that I came up with a couple of winning answers in the Blankety Blank-esque competition to fill in the gaps and my conspiracy theory behind Pride and pea powered Boris bikes also took a few points. By the end of the show I'd come joint first and got my mind sufficiently sharpened to be confident Angela's own quiz the next night wouldn't be a complete disaster. You can watch the HD ready Youtube version on the link. 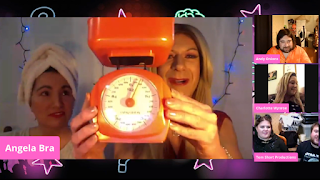 Angela Bra's Bonkers Quiz Night on Saturday was scheduled for 9pm but with tech, make-up, multiple outfit changes and general faffing about started three hours earlier. Come 8.40 though I was sat in front of a shower curtain festooned with fairy lights chatting to my contestants for the night. Bang on 9pm the intro rolled and we were off with four rounds of varying daftness. General knowledge in a general's hat was followed by a song lyric round, a video round featuring footage created by resident contestant Andy Onions, a bonus round just for Andy to account for him making the video and a final round involving guessing the weight of objects owned by Annie Sup (Angela's housemate / my wife.) I won't give away the pun powered titles for some of these rounds and will leave it to you to click the link and find out for yourself.

The show lastest about 1:15 and felt turbo-charged for the most part. Running a quiz is a very different beast to performing comedy straight and gives both the contestants and host the chance to continuously adlib safe in the knowledge that everyone will at some point come back to questions and answers. The pressure to be funny is less intense and as a result when funny occurs it's more natural.

Importantly also, with the pub quiz aspect opening the show up to multiple audiences the viewing figures were excellent with approximately 400 tuning in live and a further 200 watching the recorded version today. Once this lockdown's over Anna and I will be looking to take it live but until then regular episodes are almost guaranteed.

Tomorrow it's back to the weekday necessities but I'll certainly be looking for more opportunities for Angela to pop up on alongside her own doings. The most recent Anything Goes Online Comedy is close to 200 views itself which is a huge improvement on the past few.

I've also attracted a troll or two this week which I'll take a compliment.